Church of Scientology London tackles drugs in the workplace

London: As London is arguably the epicentre of the working world, tackling drugs in the workplace is a hot topic, as expertly illustrated by the two guest speakers at the London Drug Awareness Conference June 26 that launched two days of drug education and prevention activities organized by the Church of Scientology of London.

The conference “Do we need to tackle drugs in the workplace?” was part of the Church’s year-round effort to combat the drug abuse epidemic that, according to the United Nations Office on Drugs and Crime, causes nearly 200,000 drug-related deaths each year.

Online pharmacies and  “legal highs” are making the control of mind-altering drugs a problem for regulators, according to recent reports. But what kind of effect might this be having on the workplace, and what should employers do about it? As many as 80 new legal highs appear each year.

This was the subject of the conference, held to mark the United Nations International Day Against Drug Abuse and Illicit Trafficking whose theme this year is “Let’s develop our lives, our communities, our identities without drugs.”

The conference featured Mr Steven Mervish, Director of Drug-line Education, and Pastor Lawrence Solution Oji, founder of community project “SHADE” for alcoholics and drug end users, who both enlightened the audience with their first-hand real-life stories of drugs and some eye-opening information about the drug culture in London. Both speakers highlighted the importance of drug education, for young people and parents.

Pastor Solution Oji, a transformed man who used to be on the other side of the law, said, in relation to the Church of Scientology-sponsored Truth About Drugs programme which he has adopted as part of his own humanitarian work, “Anything that can help people not go down the road I went down with drugs, I see as a very valuable venture. We stop drugs and we stop lots of crime.”

Steven Mervish has given his brand of highly effective drug education to 80,000 school children in the past two years, saving untold numbers from going down the route of drug use and potential addiction. "I chose to speak at the conference because I believe the printed information I give in schools enhances my work with young people. I believe everyone has the right to know the truth about drugs".

Mark Pinchin, Drug Free World Co-ordinator for London said “It gives one further inspiration to hear the views of our speakers that something can be done to address the drug epidemic facing our society. We know that, together, all like-minded groups and individuals can make a difference. For our part, we make The Truth About Drugs education materials available free of charge for anyone to use to educate others.”

The following day a team of Scientology volunteers and friends, dedicated to stopping drug abuse through education, hit the streets of London, where they handed out copies of The Truth About Drugs and encouraged shoppers and passers-by to sign the Drug-Free Life pledge.

For more information, visit www.scientology.org.uk/how-we-help/truth-about-drugs.html or visit the Church of Scientology, 146 Queen Victoria Street, London EC4V 4BY. Opening Hours Monday to Friday 9am – 10pm, Saturday and Sunday 10an – 6pm. 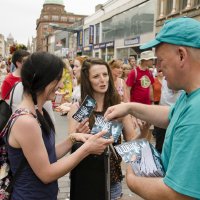